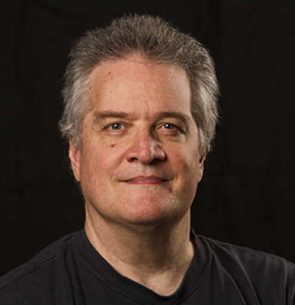 Dan Mapes has 30+ years of modeling and simulation experience. His early research in two-handed 3D interfaces lead directly to the commercialization of the PinchGloves device manufactured by FakeSpace labs. He managed the software engineering team that developed Multigen’s breakthrough SmartScene product that enabled rapid model assembly and avatar posing. As a senior researcher in LEGO’s advance toy research division in Denmark, he developed early prototypes of digital media games based on constructive and interactive play. He established RoninWorks BV in the Netherlands to pursue commercialization of consumer solutions in professional animation and game applications. He was the principle investigator and primary developer of the award winning TeachLive teacher trainer. At the IST/UCF SREAL lab he participated in a series of AR/VR application research efforts. He joined FullSail in 2016 as a course director in the simulation and visualization degree program.

Dan holds a BS in Physics from Carnegie Mellon and an MS in computer science from the University of Central Florida.